All Hands on Deck (REVISED) by magensby
Summary:

Jethro and Margie disappear and NCIS and CIA staff must work together to find them. 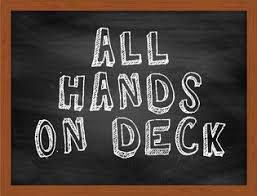 All hands on deck

(You’re almost at the end.  I don’t want to drag this out but there are repercussions to this abduction that will have lasting effects on those involved. This chapter contains a discussion of sexual assault that may not be suitable for all audiences.  The medical procedures and legal definitions are all a figment of my imagination.  This chapter involved events that happened the day after Jethro and Margie are admitted to the hospital.)

The next day dawns with the NCIS team back at the office and working again on their reports and cataloguing evidence gathered at the recovery scene, in particular the clothing worn by Jethro and Margie.  It is customary when a female is involved in a kidnapping that medical staff performs a rape kit.  The SC hospital performed one and sent all the medical information when the FBI transported the Gibbses to Bethesda.  The rape kit results were negative.  Staff at Bethesda conducted a physical exam for evidence of rape and found known.  With that knowledge in hand imagine Abby’s confusion when she examines Margie’s clothes and finds semen.  She contacts Bethesda staff for confirmation that no rape occurred and informs them of her findings.  One thing that was not previously examined but is available is Margie’s stomach contents.  The SC hospital staff had the presence of mind to pump the stomachs of both of them to aid in ridding their bodies of the drug that Simon Proctor administered and before they attempted to counteract the effects of Proctor’s drug.

Abby first examines Margie’s stomach contents to rule out the presence of semen in her stomach.  It was a long and painstaking procedure and she took great care in examining every morsel because she does not want to miss anything.  Just the thought of someone doing that to Margie makes Abby cringe.  While Abby is processing the stomach content McGee and Bishop come to the lab for an update. They both notice Abby’s strained countenance and ask her what’s wrong.

“I’d rather not say.  Can you just give me time to finish this and then maybe I can talk.’

“Abby wants wrong?  We’re all upset about this but we’re here to help each other get through this.  You can talk to us.”  Bishop says and McGee nods his head in agreement.

“I don’t want to say anything until I am absolutely certain and I won’t be until I finish this so please just leave me to finish this.”

McGee and Bishop realize that Abby will not disclose anything until she’s ready to so they leave her and return to their desks.  CIA Agent Porter stops by to gather his things so that he can return to his office at CIA headquarters.  While there Director Vance comes to thank him for his assistance on the case and to give an update from the hospital on the Gibbses. They are doing better and both have regained consciousness and are talking.  They remember everything that happened and he’s on his way for a debriefing.  He invites Porter and McGee to accompany him.  Bishop will remain and man the shop since Torres and Reeves are out on another case.  Folks must get back to regular work now that the Gibbses are rescued.

Abby continues the painstaking work of identifying each item in the stomach contents.  She catalogs each item and as the minutes pass it seems like the day turns into weeks before she completes the examination.  Looking up from her microscope she breathes a sigh of relief. No semen is found in the stomach contents.  As best as she can surmise, the men involved masturbated and ejaculated on Margie’s clothing while she was restrained.  There is evidence of rope fibers on the sleeves of Margie’s blouse and dermis cells mixed in the semen.  That means that they were close enough to her to touch her.  Abby’s stomach starts to burn and she rushes to the bathroom to throw up.  Those b******s sexually assaulted her.   Nonconsensual sexual activity with a restrained person is sexual assault. They might not have penetrated her but they did violate her.  Abby throws up again.  She washes her hands, rinses her mouth and returns to her lab to get her toothbrush and mouthwash.  After freshening up she calls McGee and Bishop.

By the time Abby completes her findings McGee has returned to the office so when Abby calls he and Bishop rush down to her lab.

“What do you have for us Abby?  Are you ready to talk with us about what had you so rattled earlier in the day?”

“Margie was sexually assaulted?” Abby replies with tears in her eyes.

“No she wasn’t Abby.  Both hospitals conducted rape kits as is standard procedure in an abduction.  There were no signs of penetration.”  McGee responds.

“There is semen on the front of Margie’s blouse in the chest area.  Included in that semen are dermis cells which means that the male was standing close enough to rub themselves against her blouse. Even though there was no penetration there was nonconsensual sexual activity against someone who was bound and not able to resist.  According to the legal statute that constitutes sexual assault.”  Abby firmly states to McGee and with a glare challenging him to refute her.

“Oh my goodness, oh my goodness!  I can’t believe this.  After all that they put her through they sexually assaulted her too!”  Bishop interjects too upset to say anything more.

Before either Abby or McGee can respond, Director Vance walks in looking for McGee.  Before he opens his mouth to address McGee he notices the tears in Abby’s eyes, the shocked look on Bishop’s face and the look of utter belief on McGee’s face.

“May I ask what is the problem here?  You all look like you’ve received bad news.  Did something happen to Gibbs since we left the hospital?”

The three of them look at Director Vance trying to decide what to say, how to say it and who should say it.  Abby decides to take the lead.

“Director Vance, when I examined Agent Gibbs’s clothing I found evidence of semen on her blouse.  Knowing that both hospitals performed rape kits on her and neither came back positive it was puzzling to find semen on her clothing.  I then examined her stomach contents that the SC hospital provided since they pumped her stomach to rid it of the drug that Simon Proctor administered. I was searching for any evidence of semen in the stomach contents.”

At that point, Director Vance, McGee and Bishop realize what Abby is saying and in which direction the conversation is leading.  They all want to go somewhere and throw up but they can’t so they stand there and continue to listen.  Abby continues with describing her process and her findings.

“I examined the stomach contents and thankfully I did not find any traces of semen in them. Nevertheless the fact that there is semen on her blouse and dermis cells in the semen and on her blouse is evidence that they masturbated on her.  Add to that I found rope fibers on the sleeves of her blouse further evidence that she was bound and there was semen and dermis cells on those rope fibers. They sexually assaulted her Director Vance. I know that they did not penetrate her but they sexually assaulted her nonetheless.”  And with that Abby rushes out again to the bathroom and Bishop quickly follows her.

Director Vance and McGee stand there not knowing what to say and feeling anger against the men who did this, hurt and sadness for Mrs. Gibbs and fear as to how Gibbs will handle this.  When the two of them saw Gibbs earlier at the hospital he seemed on the mend.  He will stay in the hospital for a few days and then will go home but will receive, once again, a psychological evaluation before returning to work. Evidently Gibbs does not know about this.  Mrs. Gibbs was in radiology for scans when they visited with Gibbs.  She has bruised ribs and the doctors want to make certain that no organs are punctured or damaged.

Abby and Bishop return and Director Vance thanks Abby for her thorough work and asks that she complete her report so that he can forward copies to the FBI and CIA Directors.  Additional charges will be filed against the men now in custody.  It’s already near the end of the workday and Abby agrees to provide a copy of her report to Director Vance and then she will head to the hospital to see Gibbs.  Director Vance leaves to return to his office and McGee and Bishop go back upstairs to their desks to finish up for the day.

A/N: This was a difficult discussion and chapter to write.  The decision to add this component to the story was not lightly made.  It will greatly impact everyone and factor tremendously into the relationship between Jethro and Margie.   Next this discovery is made known to all those involved.