Bio: I just have a love for romance.

It Is Yours by Sade
Rated: 17 and older After being hired as the executive assistant to one of the youngest most influential and sexy corporate raiders of the 21st century Kenya Price comes face to face with her destiny.

Kenya is a mild mannered 22 year old thick sista with a beautiful soul and a caring spirit. Though her ultimate goal is to go back to university and earn a Degree in Childhood Education to become an Elementary school teacher, she takes the job working at the Roswell Corporation so she can save and finish off her schooling. Her motto is "Love can heal all wounds."

Grant Abraham Roswell III is a man that prides himself on a being a level headed, hardworking, no nonsense go getter. At the age of 24 he is a MIT graduate with more money than he could spend in a lifetime, he parties with rock stars, sleeps with models and feels that life cant get any better than that.His moto in life is "Who needs happiness when you have Money and Power?"

When Kenya enters his life and shows him there is more to life. Will he trust in Love or Will he let society take love away from him?

Another good chapter. He is so into her. Who calls a grown man Grantie Bear. LOL. Keep going love this story so far.

Author's Response: =D I will

Dang he's cold but I love him.

Author's Response: lol so very true, and Im glad you like him.

First Grant is so direct about who that chick was. He has player written all over him. Kenya will change that I hope. Keep it coming.

Author's Response: Oh Kenya will bring poor Grant to his knees, In more ways than one =D

Love this chapter. This is really shapingup to be great strory. I love Grant and Kenya together. Keep it coming please.

Author's Response: Im glad you like it, thank you for the review~

I love this story. I hope Kenya shows Melissa she is not the one. Grant seems to be feeling Kenya also. I hope she brings him to his knees.

Author's Response: Im glad, hope to keep you loving it.Thanks for the review~

yes another great update. i love the way she payed for the food. keep it coming this shaping up to be a great story.

One Wish by Sade
Rated: 17 and older A Special Thank You to MINX for the AMAZING banner.

Alicia meets Nick and they begin a Journey full of love, forgiveness and Passion. From two different worlds their love bridges the culture gap and emotional walls come crashing down. This is a Story of faith and love in its purest forms.

Alicia is in her third year of nursing school, at 23 she is more than ready to take on the real world after moving to New York far away from her overprotective family where she is learning to depend more on herself and taking big steps to her independance.

Nick is a first generation Chinese-American living in New York, at 25 he is done pleasing everyone but himself, he was to be a doctor like his father and for most of his life he spent his days and nights studying and working at that goal... In the last year before his graduation from medical school Nick decides to take a break and
somehow how ended up buying a club with his bestfriend Sean. one year later Nick is conflicted though he loves his life the one he made for himself he misses his family and he even misses medical school. After his little detour from the path his father wanted him to take his family relationships are strained at best. Alicia teaches him the meaning of forgiveness and shows him that its time to let go of the past to embrace the future.

Dang I like this story so far. I love that she doesn't know how attractive she is. Thanks for another great chapter.

Author's Response: Thank you for the review =D Im glad you like my story!

The cousin is off the hook. Ilike Nick and Alicia keep it coming please.

Author's Response: I will thank you for your wonderful reviews.

Oh my her cousin is off the hook.  I hope she gets whst she deserves. I hope she comes back crawling on her knees to Alicia.

Author's Response: lol She will get what she deserves. Im sure Alicia is a forgiving woman though.

Alicia's family is so messed up. I hope her mom comes around to see that she has a great daughter. Keep it coming.  I love this story.

Yes keep it going. Kandice is off the hook. I hope she gets what is coming to her. Nick and Alicia are great together. He needst o put her family in their place when the time comes.

Author's Response: Glad you like it, She will have to do it. I think Nick will be her support when it comes to her family. Granny will be coming for a visit soon enough.

Nick is such a sweetheart to bad about the fish. Keep it coming.

lol I will try, thanks for the review~

For Love and Football by Sade
Rated: 17 and older One night in Vegas changes the luck of two strangers.

Grace is a good girl to the bone, though she loves her job as a teacher she wants some excitement and for her twenty-fifth birthday she wants to shed that good girl image. Not be predictable Grace but a sexy wanton vixen,so her friends take her to Las Vegas, where her life is changed forever.

Kevin is an NFL all star and all around player. He is in Vegas because he was told to lay low after sleeping with the wife of one of his team mates, he has to figure out a way to change his image and quick.

Sometimes what happens in Vegas shouldn't stay in Vegas and in Kevin and Grace's case it wont.


Title: Chapter 1: What happens in Vegas!

This is a great 1st chapter. I say keep it coming. This is the best 1st chapter that I have read in awhile.

The Professor by Suprina Frazier
Rated: 17 and older

Willing to do whatever it takes to finish college and help her family out of poverty, Aurelia Bunting does the very thing that she hates – she becomes an exotic dancer/stripper. On top of that, her steady boyfriend just cheated on her with her best friend and she has a large tuition bill due.

Fresh from a breakup, too, Professor Baron Weaver is not so deep in grief to overlook the beautiful Virgin Island native that attends his brother’s bachelor’s party. There’s something about her that’s just so…so delectably unforgettable.

Since anonymity is crucial at events like these, Aurelia has no idea that the man she’s dancing for is going to be one of her new professors this year. If either of them had known, they would have never even considered finding comfort in each other’s arms that fateful night.

After reading your story on this website. I went to Lulu.com and got the whole book. It was a great read. Thank You and keep the stories coming you are a great author.

Author's Response: Thanks for doing everything you did, Tam14611. Reading the short story here, going to Lulu.com, reading the expanded version, and then coming back to leave a comment. I LOVE it! 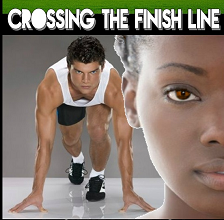 * NOW ON THE CHAMBER'S TOP TEN MOST FAVORITE STORIES LIST *

When the lines are drawn, will you risk your life to cross them for love?

In the Summer of 1988, tragedy hits home for Charlene Jacobson and her father when her little brother is killed playing a game of basketball in their Detroit housing projects.  She soon finds herself living in the small rural town of Millersville, Georgia, with her estranged grandmother. Millersville is a place where time stands still and the racial divide is as prevalent as the 1950s.  Secrets, lies, and betrayal lurk in every corner. Yet, through it all she finds solace in the arms of Ryan Quinn, a white senior track star and the son of the town Sherriff.

Will their love cross the finish line?  Please R&R.

© All right reserved by Rachelle Patterson aka wisedec4u
Do not copy, publish, revise or distribute without the expressed written consent of the above author.

I love the characters, and I really like the summaries that you put at the bottom of the pictures.

A Love Worth Learning by NubianBoriquaPrincess
Rated: 17 and older Aurora Dupree walked into Port Charles for one reason only:  To find her biological father.  But what she got in return was something that she in a million years would have never suspected.

I'm loving this story. Lulu and Aurora are going to be friends I hope. I really hope that Carly gets on board, and realizes that Aurora is not a threat. I get the feeling that Aurora is looking for the love of a mother and father. I hope that Sonny and Carly can provide that for her, and I hope that Jason can provide some male love also. LOL.

Keep up the good work can't wait for you next update.

Thanks so much!  I think Lulu and Aurora are going to be good friends too.  And Carly, well Carly better get her act together, because you're right Aurora is NOT a threat.  She just wanted to find out about the dad she never knew.  And maybe have some kind of loving from Jason too..wink wink.

Thanks so much for the review!