Guinevere has triumphed over test and difficulties she never expected and crossed the southeastern border of Camelot into strange lands. Having lost everything upon which she had hoped to build her new life without friends and family how will she survive?

It has been a mere two weeks since Guinevere departed Camelot in a cloud of scandal and shame and the ripples of events of that fateful day are only starting to be felt..How will King Arthur and the knights of the round table cope with a hostile nobilty bent on using the actions of Guinevere and Lancelot against all common folk? 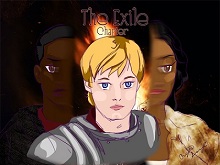 Secure by AGDoren
Rated: Teen or Above

Set sometime between seasons 2 and 3 Gwen receives a surprise visit from Prince Arthur. Unable to locate Morgana Arthur does what he can to make sure that one of the women in his life is safe. The visit becomes a bit passionate.